Montmartre is one of the most famous parts of Paris. This is where famous painters, artists, musicians and art representatives lived. In this article, you’ll learn about the most interesting places in this part of Paris. And if you want to stay in Montmartre, you can find a hotel here.

We have an excellent audio guide for Montmartre. It lasts about two hours and goes through the most important sites, including those hidden from tourists. Download it before your trip and you’ll be ready to make the most of your time in Montmartre! First we recommend visiting Moulin Rouge. The famous red mill, where since the end of the nineteenth century and to this day pouring a river of champagne, young ladies dancing the can-can, is located at the foot of Montmartre. On the top of the mountain you’ll find Sacre-Coeur, the largest Catholic cathedral in France, if not in all of Europe. You will have an excellent view of Paris from the viewing platform in front of the cathedral and from under the dome. Sacre-Coeur and Montmartre are the roof of Paris. In third place is the Place Pigalle. Montmartre is famous as the «red light street» of Paris. On Place Pigalle there are sex shops, cabarets, and many other interesting places. Unfortunately, the museum of erotism is now closed. Seven floors of interesting artifacts had nicely complemented the scene.

It can be noisy there in the evening, so we do not recommend choosing a hotel in this quarter. Although the prices are often quite attractive. Next is the square in front of the former town hall, Place du Tertre, along with the old church, Eglise de St. Pierre. Montmartre used to be its own village, not with a part of Paris, so that’s why it has a town hall and church. Now when you visit you can find many artists that will draw your portrait if you want (it’ll cost you more than €20, though) as well as mimes and musicians.

The wall of love Le Mur des Je T’aime. This unique site says «I love you» in more than two hundred languages. This beautiful art installation appeared not too long ago in Montmartre thanks to the artists Frederic Baron and Claire Kito, who tell us that only languages get in the way of world-wide love. Le Bateau-Lavoir is not a real ship. It’s just a building. It was called a ship, because the beds in this house were arranged as in a sailor’s cabin: it was cheaper to rent such accommodation. What makes this building special is that Picasso and dozens of famous painters of that time lived here when they were unknown and poor. This is where Pablo painted his first picture in a style that was new to the world. When Picasso and his friends were staying in le Bateau-Lavoir, Au Lapin Agile is where they used to go to have fun. It’s one of the oldest bars in Montmartre. La Maison Rose (The Pink House) is another cafe that has been preserved here since the 19th century. Its photos are incredibly popular on social media. These locations are next to Montmartre vineyards. Now this wine isn’t cheap. We recommend you to look in a quieter place — the Renoir garden. It is located at the Museum of Montmartre. The museum exhibition will tell you how Montmartre became so special. In the garden you can relax in the shade by the pond, drink coffee or wine.

By the way, in Montmartre among fifty other artists Dali had time to live. Now there is a shop-museum in Montmartre with original works of the master (L’Espace Montmartre – Dali).

Ticket price: €15, the audio guide is included. Book your visit by folowing this link.

The man passing through the wall The French writer Marcel Ayme also lived in Montmartre. He’s buried here in Montmartre’s cemetery. After his death, his friend Jean Marais made a monument that goes with the name of one of Marcel Ayme’s stories «The man who walked through walls». There used to be more than 20 mills in Montmartre. Now there are only two. One is Le Moulin Rouge, and the second is Le Moulin de la Galette. It also used to be a cabaret, but now it’s a nice cafe with a great view of Paris.

The monument to Dalida 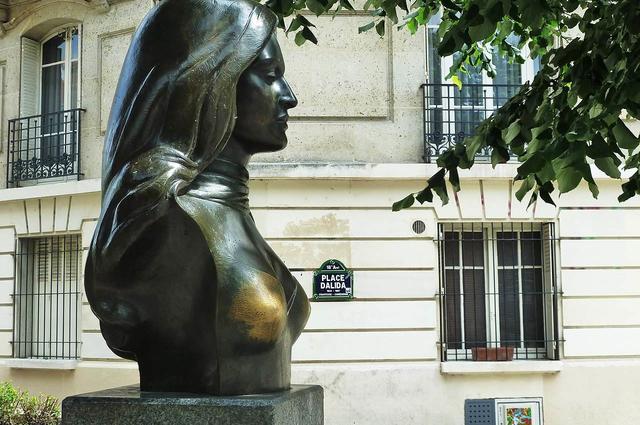 Dalida’s home, La Maison de Dalida, is here in Montmartre, and there’s a square named after her as well, La place Dalida. A bust of Dalida is on the square and every tourist thinks it’s his duty to touch her breast for good luck in love. Finally, one more tourist site in Montmartre and Paris is church Saint. Jean de Montmartres. It was built in the 20th century. And even though it’s Catholic, it looks almost like an Arabian palace.

The list above is just some of the interesting places you’ll find in Montmartre. If you want to find your way around more easily, we suggest picking up a map from the tourist office, Office de Tourisme. That way you won’t get lost and have a plan which is a real work of art. The office is at 21 place du Tertre and is open from 11 to 6 from October to April and from 10 to 7 during the warm months.

Have a nice trip to Montmartre! Where to go to see Paris from above Felix Meynet / Unsplash Ireland: a guide to the country of leprechauns
0 replies

Airports airports_top Alps Bars and Restaurants Castles and Palaces Christmas and New Year eiffel_top Foods to try Holidays Hotels How to get to…? How to save money Local food Metro metro_top Museums museums_top Natural attractions One day Our advice Route Shopping Sights to see sights_top Tickets tips Tourist sights Traditions Transport Travelling in the winter Travelling with children versailles_top
5 Places to Avoid Staying as a Tourist in Paris